HomeGround Magazine – Issue 70 has been mailed to subscribers 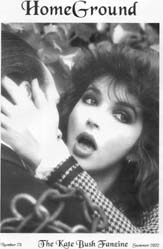 The Summer 2002 Issue. It’s 20 years since the release of The Dreaming album (hence the cover image), and the magazine marks the occasion with a look back at the effect the album has had over the years by several readers. The issue also includes an interview with Charlie Morgan, all the latest news including reviews of the Norwich tribute show, the second part of  the piece on Kate’s literary influences and all the usual content that’s helped the magazine keep going for 70 issues now!