“The veteran risk-taker’s Ivor Novello-listed album maps out a future for female musicians, according to one of her famous fans …

The nomination this week of Kate Bush‘s latest album, 50 Words for Snow, for an Ivor Novello award is an acknowledgement of the profound influence she continues to exert …

Anna Calvi, whose eponymous debut album was nominated for the Mercury music prize 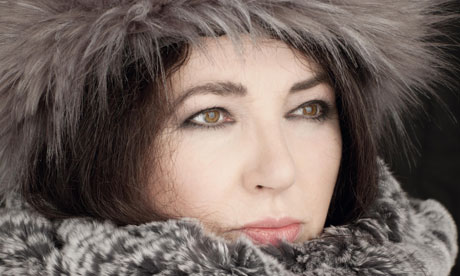 and a 2012 Brit award, believes that Bush, with her 2005 album Aerial and 50 Words For Snow … is mapping out a new future for female musicians. “I like the fact that she’s embracing her age, her family and her life, and that it doesn’t mean that you still can’t be a really amazing artist,” she says. “That’s what I’d like to imagine myself being like in 20 years’ time. I love how unafraid she is of taking risks. She does some crazy things on her records, especially with her voice. It sounds like there is a complete surrender to her art, and I find that really inspiring.”

Amanda Palmer, of acclaimed punk cabaret duo the Dresden Dolls, believes one of the reasons that Bush remains so important is that “she’s a creator, not a reactor”. Palmer says: “You can tell that she explores and translates the muses inside, as opposed to pleasing the worlds outside. Artists like this – the ones who don’t muddy the connection – should be revered like gods.“

My Kate CV: Kate fan since 1978. Saw Tour of Life at the London Palladium 1979. Went to first KBC Convention 1980. Founded Homeground with Dave 1982. Worked on 1985, 1990, and 1994 Kate Bush Conventions, and the 1986 Video Party with Dave, Lisa of KBC and Krys. Appeared in videos for The Big Sky and Experiment IV. Wrote Introduction, Chronology and Discography for EMI Music Publishing's 1987 "Kate Bush Complete". Wrote the sleeve note for the remastered 1998 reissue of "Hounds of Love". Invited to write sleeve notes for other reissues which never happened. My other CV: born 1955 in Bermondsey London, educated at Galleywall Primary, Walworth Comprehensive, and London School of Economics BSc(Econ)(Hon) 1976. Currently an Officer of the Crown Court determining legal costs in crminal cases. Met Krys in 1982 through Homeground, we were engaged on Glastonbury Tor on Kate's birthday in 1983, and married in November 1984.
View all posts by Peter →
This entry was posted in 50 Words for Snow, Awards, Kate Bush news. Bookmark the permalink.