“Extraordinary business as usual”: The Guardian 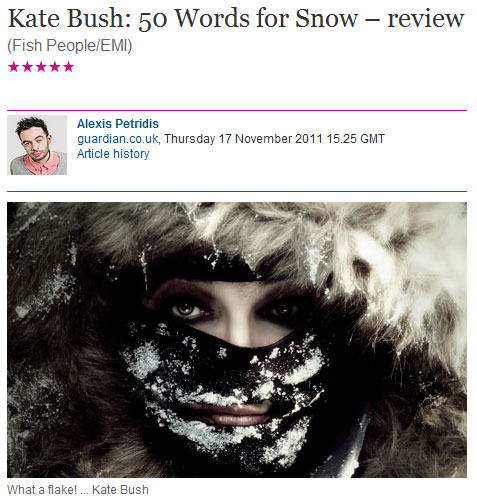 “There are many peculiar things about Kate Bush’s 50 Words for Snow. If it’s not strictly speaking a Christmas album, it’s certainly a seasonal one, and the seasonal album is these days more associated with Justin Bieber than critically acclaimed singer-songwriters following their own wildly idiosyncratic path. It devotes nearly 14 impossibly beautiful minutes to Misty, a song on which Bush imagines first building a snowman and then, well, humping him, with predictably unhappy consequences … For all the subtle beauty of the orchestrations, there’s an organic, live feel, the sense of musicians huddled together in a room, not something that’s happened on a Bush album before. That aside, 50 Words for Snow is extraordinary business as usual for Bush, meaning it’s packed with the kind of ideas you can’t imagine anyone else in rock having. Taking notions that look entirely daft on paper and rendering them into astonishing music is very much Bush’s signature move. There’s something utterly inscrutable and unknowable about how she does it that has nothing to do with her famous aversion to publicity.“

My Kate CV: Kate fan since 1978. Saw Tour of Life at the London Palladium 1979. Went to first KBC Convention 1980. Founded Homeground with Dave 1982. Worked on 1985, 1990, and 1994 Kate Bush Conventions, and the 1986 Video Party with Dave, Lisa of KBC and Krys. Appeared in videos for The Big Sky and Experiment IV. Wrote Introduction, Chronology and Discography for EMI Music Publishing's 1987 "Kate Bush Complete". Wrote the sleeve note for the remastered 1998 reissue of "Hounds of Love". Invited to write sleeve notes for other reissues which never happened. My other CV: born 1955 in Bermondsey London, educated at Galleywall Primary, Walworth Comprehensive, and London School of Economics BSc(Econ)(Hon) 1976. Currently an Officer of the Crown Court determining legal costs in crminal cases. Met Krys in 1982 through Homeground, we were engaged on Glastonbury Tor on Kate's birthday in 1983, and married in November 1984.
View all posts by Peter →
This entry was posted in 50 Words for Snow, Kate Bush news, Press, Reviews. Bookmark the permalink.

3 Responses to “Extraordinary business as usual”: The Guardian