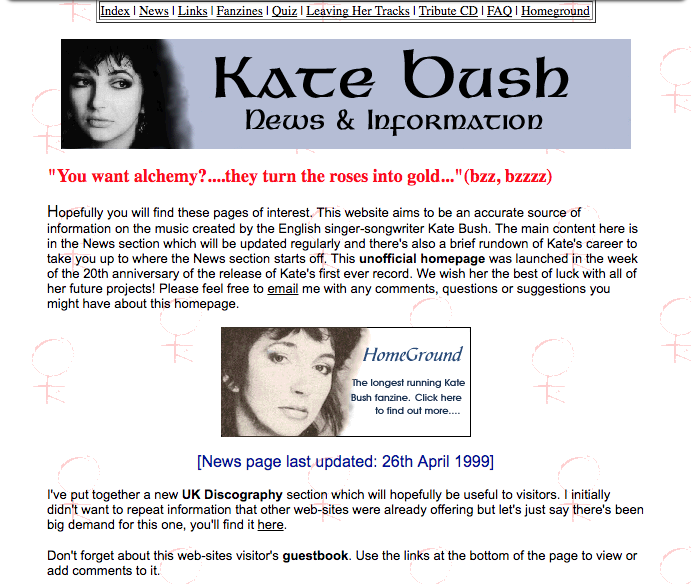 The front page of Kate Bush News & Information from 1998

At the risk of everyone getting “anniversary fatigue” what with all the Kate 40th celebrations this year, I thought it was worth marking the fact that on this day, 20 years ago, I launched the Kate Bush News & Information website. On the 25th January 1998 I had no training in HTML or web design or photoshop (could you tell?!!) but I was driven by a need to put something on the web that I felt was sorely lacking at the time – a site that told the world that, despite a 5 year absence (at that point) Kate was still a contemporary and very influential artist and there was still PLENTY of Kate-related news to report and get excited about. Basically…I wanted to make a website that I could browse myself and enjoy (and weirdly I often found myself doing just that!) It was a different online world then – no Google, Facebook, Youtube or Twitter, and it was a lot of hard work gathering news and doing updates without the luxury of things like WordPress – it was a labour of love.

Luckily the site rapidly gained in popularity and fans became very generous and helpful informing me of all kinds of news from all over the world. Five years later, in April 2003, I launched the site forum which became a thriving meeting place for all manner of discussion and debate among Kate fans. My friends in HomeGround agreed to have their home here on the site and we have enjoyed many exclusive stories and announcements over the years – like when Kate wanted to tell her fans about her son’s birth through the site or when we were the first place anywhere to officially announce the Aerial release after 12 long years between albums!

As we continue to do what we do, and now with the addition of our Kate Bush Fan podcasts (hope you can check them out), I’d like to thank you all so much for all the support and goodwill you’ve shown this site over the last two decades. Special thanks to Peter, Krys and Dave from HomeGround, to Paddy Bush, John Carder Bush and Del Palmer for their warm support, to Brian Cloughley for so much amazing graphic work over the years, to Mike Wade for steering the forum through all kinds of drama during the early years, and to my family and friends who must have often thought I was a bit mad. And of course to Kate for making the extraordinary music that has brought us all together. You’ve been great – THANKS! – Seán x 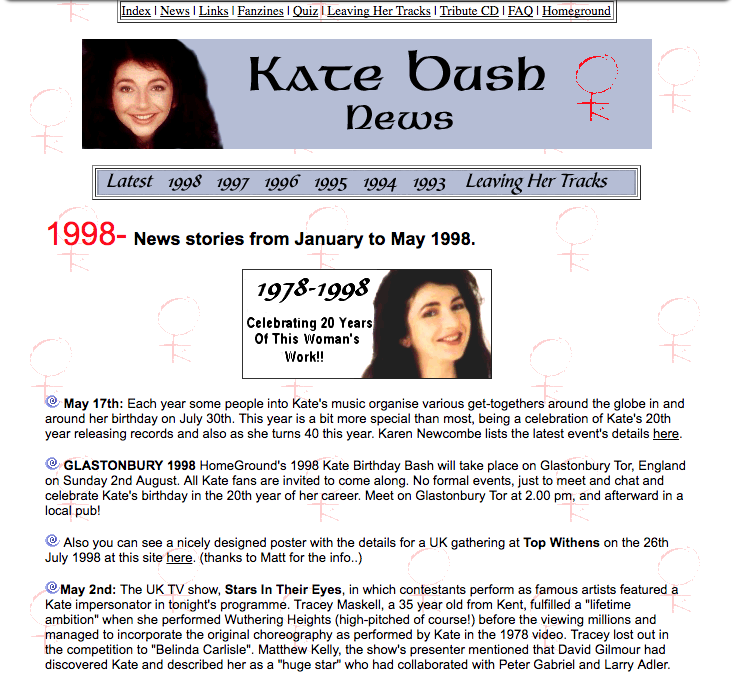 The News page of Kate Bush News & Information in 1998

Seán Twomey has been running the Kate Bush News & Information site since January 1998.
View all posts by Seán →
This entry was posted in Kate Bush news, www.katebushnews.com. Bookmark the permalink.