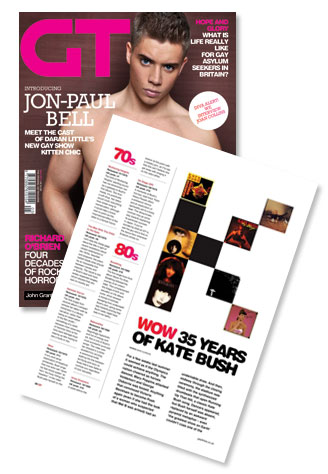 Gay Times in the UK have been in touch to let us know that they have a nicely put together feature on Kate in their current issue (May 2013). From their press release: “Calling all Kate Bush fans! Gay Times, the world’s longest-running gay magazine has decided to celebrate 35 years of Kate Bush in our new issue with a unique timeline of her greatest hits. GT jump back 35 years to tell the story of each of her sensational tracks. Looking at her releases like this underlines how Bush’s career is full of surprises – invariably pleasant ones. She’s moved from quirky outsider in Wuthering Heights, to the creator of one of the definitive albums of the 1980s in the shape of Hounds of Love, before a relative critical lull with The Red Shoes in 1993. Simply celebrate the variety of songs that make up her outstanding discography in our new issue on sale in stores and available to download now.”