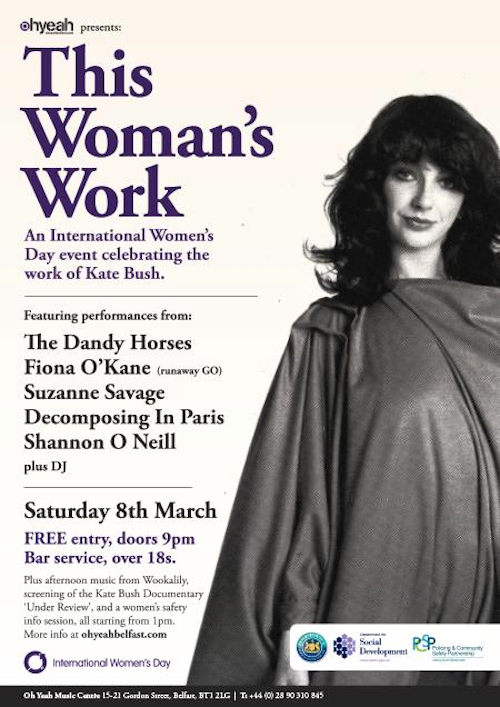 The ‘Oh Yeah Centre’  in Belfast is hosting an International Women’s Day special of music and film celebrating Kate’s work. From the press release:

Kate Bush is one of the most successful female solo artists of the last 35 years. At the age of 19 she topped the UK singles charts with her debut single ‘Wuthering Heights’ which made her the first woman to have a number one hit with a self penned song. Since then she has released 10 albums, and has been nominated for and received several awards including an Ivor Novello in 2002. In 1980 her third album ‘Never for Ever’ made her the first woman ever to enter the album charts at number one.

In addition to celebrating her incredible and inspirational contribution to the world of music, the evening will also highlight an interesting link that she has with Belfast, through a short film. The story tells of how she sourced a Lambeg drum from a shop on Sandy Row, when recording the album ‘Hounds of Love’. The instrument which was specially commissioned went on to feature in the hugely successful tracks ‘Running Up That Hill’ and ‘Cloudbusting’.

The event which is free kicks off at 1pm with the screening of a Kate Bush documentary ‘Under Review’, plus live music from Wookalily, and a women’s safety info session. The evening event will start at 9pm.”