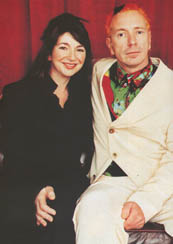 As far as Q Magazine were concerned, the magic moment of the awards came when Kate persuaded John Lydon to sit down and have their picture taken. They write: “Who’d have thought it? Kate Bush out of hiding and John 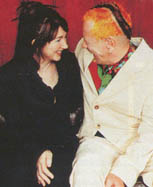 Lydon proving vaguely approachable!”. John Lydon is asked “You’re obviously quite a fan of Kate Bush?”, to which he replied: “Kate Bush is a true original. It’s not nice that she’s been imitated – Torrid Aimless, sorry, Tori Amos. But Kate Bush is a genuine talent. She went through the same shit I did when she started, “Oh that’s not singing”. Who the f*&k wrote the rules about music?.”

Nigel Godrich, winner of Best Producer for Travis and Radiohead said that the best thing for him so far in 2001 was meeting Kate: “I’m in awe of her. Her records fundamentally enforced what I am as a person. When you listen to stuff as a teenager, you identify with elements in the music. There’s a real hidden wisdom there. It’s beautifully written. If she needs anyone to mix her new album, I’m after the job….I’m going home to listen to Kate.” 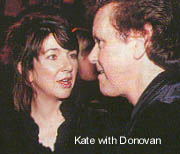 Elsewhere Midge Ure wistfully recalled his first encounter with Kate: “It was in the late ’70s and I was in The Rich Kids and we were appearing on a TV show together. I was desperately trying to get off with her and get a lift back in her limo.” QTV (the magazine’s digital televison channel) reports that Midge introduced Fran Healy, Travis lead singer, to Kate, but that he was so in awe of her that he was lost for words! The magazine also pictures Kate chatting to Donovan (Kate recorded his “Lord Of The Reedy River” as the b-side to Sat In Your Lap in 1981).