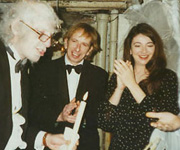 Newsbits: Tracy Story has found some photos of Kate on magician Simon Drake‘s website. Simon has updated his site with galleries which include pictures of him on stage with Kate during the 1979 Tour Of Life (including one or two not seen before) and also a recent one of Kate and her partner Danny (left) enjoying one of the exclusive events at his House Of Magic. One photo caption on the site from the tour reveals that the violin madly played by Simon on stag on the tour was Kate’s as a child and is now hanging on display in his House Of Magic. Simon is one of Britain’s most famous magicians and his site is well worth a visit here….DJ Andy Smith (Portishead) has issued a remix of Kate’s The Man With The Child In His Eyes on his new CD Document II, and people seem to like it. The CD was released September 15th. Read more and hear a clip here.

On the 17th October, Erasure’s Andy Bell told the Guardian newspaper of a recent visit he took to Kate’s house: “…Kate Bush is a long-term favourite he still adores. Bush is in the enviable position of seeing her popularity and enigma increase steadily, despite, or perhaps because of the fact that she hasn’t released a record or made a public performance for a decade. Bell’s favourite Kate Bush album is The Dreaming. “Probably because it was her first flop, and it made me feel better about our first flop, which was the 1995 Erasure album,” he says. “We went round her house in south London recently and she was everything I expected: she was really nice, she made us tea in a proper teapot, she had baked a cake, she had loads of cats, and she was really softly spoken. I was a teenager when she first came along and I still think she’s fantastic.” Read more here.

Dido mentions Kate in an interview with to The Guardian on the 3rd October. “…now she is taking a few lessons in career management from her early role models. “When I was 13 I got a record player for Christmas, so I went out and bought Hounds of Love by Kate Bush and Diamond Life by Sade, which both remain absolute classics. Those are two women who have got the right idea: they have a life, they have great careers, and they make records when they want to make records. Sade was also a hero for me when I was growing up because I used to see her around in Islington and she always looked so cool.” On the eve of the release of Dido’s second album, Life for Rent, Bush and Sade are there to remind her where she can go from here. “You have to find a way to make music without putting yourself on a treadmill,” she says. “Kate Bush and Sade do what they do brilliantly, they don’t try to be anything they’re not, and they carry on quietly and confidently. It’s like when I started, I kept being asked by the record company what my image was going to be. I don’t know! Me?” Read more here

Greg Gilligan send in this quote from actor Guy Pearce from the October Empire Magazine. In one question sent in by the movie mag’s readers he is asked what he thinks the best music video of all time is: “…I look back at Kate Bush videos, which was in the 70’s, and when you look back at some of them – as limited and new as they were – they’re in some ways even more effective than videos today. I like to have a look at Wuthering Heights and Babooshka every now again. Particularly because she looks gorgeous.” (thanks Greg – keen-eyed forum users will have spotted a very interesting story posted a while back by Krys about Guy, HomeGround and a certain dress from a certain 1989 video…)

Marinus de Goederen writes: “In the beginning of this year I flew to Abbey Road to record there for a day. (It was a prize I had won.) I’ve put my story online. It’s in Dutch, but hopefully I will write an English version too. I also added a picture of Kate Bush that is hanging in one of the halls over there.” Read Marinus’ account of his day, “Spinning In The Chair At Abbey Road” here. (thanks Marinus, lucky you!)…Donny on rec.music gaffa has noted that here Big Boi of the group Outkast has said “We’re also huge rock fans – AC/DC, U2, Aerosmith, the White Stripes, Kate Bush.” (thanks Donny)…singer Kate Ceberano is compared to Katehere. Irish singer Cara Dillon has released a new album “Sweet Liberty” and reviews (such as Q Magazine) are once again comparing her musical style to Kate’s (Cara is on record as being a huge Kate fan). Read more here (thanks Malcolm)…

On the 19th October The Observer newspaper in the UK have named Kate as the number one Greatest Eccentric In Music:“Popular music will always need eccentrics, the people who show mainstream life how things can be stranger, more beautiful, or just… different. These 10 singers, musicians and producers are, arguably, the most peculiar of all… Kate Bush – Number One because she brought her own brand of rural gothic eccentricity right to the very heart of the mainstream. In deepest Plumstead, she spent her teenage years running the Incredible String Band fan club, then studied mime under Lindsay Kemp, the man who gave Bowie similiar ideas about the poetic power of prancing about. To this end, La Bush even made leggings and spangly cat suits almost trendy for a brief instant. Her first moment remains her finest: ‘Wuthering Heights’, Emily Bronte’s gothic novel rendered as a three minute pop song. She later did the same for Molly Bloom’s solliloquy from James Joyce’s Ulysses on The Sensual World. Now a pop recluse without being an acid casualty, rumours persist that she is working on an album, the first since 1993. A major influence on inspired loons like Bjork, Tricky, even Tori Amos.” Read more here (thanks to Michael Leitz, Simon, Amanda Harrold and Sara Nicholson)

Yet another Top 100 singles survey here from Radio Cambridgeshire, Kate at 73 with Wuthering Heights…Channel 4 repeated theTop Ten Pop Princesses show from 2001 featuring Kate on 25th Oct. (sorry this didn’t make the news page in time but you can download a clip of this lightweight assessment of Kate’s career here – thanks to Charles Slane, and to Michael Leitz for the clip)…The Scotsman newspaper reports on a

fashion show featuring Kate’s music here. Clips from Alan Partridge‘s Comic Relief mentions of Kate are available here…in the September 26th 2003 edition of the very popular U.S. magazine, Entertainment Weekly Kate gets a mention in an article called: “The Joy of Sets: Dreaming up these 25 playlists doesn’t mean we’re music geeks, right?” Kate’s Coffee Homeground is included in a list of “coffee” songs. (thanks to Tim Bertram)…online store Amazon is listing a DVD supposedly featuring a live version of Wuthering Heights here… Vix write to tell me that they are “indeed vocally inspired by Kate Bush” so check them out here… BBC Leeds are raving aboutFour Day Hombre (pictured), whose single First Word “effortlessly develops into a rock version of the Kate Bush hit Running Up That Hill without you even noticing the changeover.” The band are chmpioned by Radio 1 DJ Chris Moyles. Read more here…This Woman’s Work, written by Kate, published by EMI, performed by Maxwell, won an BMI Award in the category Pop. The awards “salute the top UK and European songwriters and publishers in the pop, urban, country, dance, college and film/TV music genres. The gala dinner and awards ceremony honors the most performed songs on US radio and television” Read more here…finally, while many of you wish for a long overdue proper DVD release of Kate’s music videos, Michael Leitz has compiled a list of known DVD compilations which feature something of Kate’s. They’re on a text file here(thanks to Michael Leitz and Cynthia Conrad for sending a lot of news my way as usual – cheers guys)