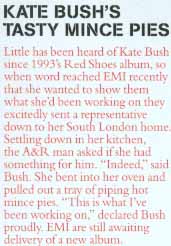 Hi all, back again after a small break (blame the mince pies and mulled wine!). KBN&I will be six years old in about a week. Indications are good that 2004 is an album year, but we don’t want to jinx anything so let’s keep that to ourselves for now. The site is kicking off the new year with a mound of newsbits. Please remember that even between updates on this news page our forum is open 24 hours a day for you to post on and it’s a very busy and entertaining read – the Kate discussions are just the tip of the iceberg – thanks to all the forum members for making it a huge success. On with the latest KB schtuff:

The latest editon of Q Magazine features the “100 Most Insane Moments In Rock!” As you’ll see in the cutting opposite allegedly regarding a visit this year to chez Kate by an EMI executive. (thanks Malcom and thanks to David Sheasby for the scan)…i 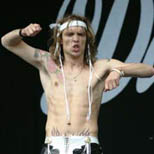 n an interview about Pop Idol Justin Hawkins lead singer from The Darkness had this to say: “I know it sounds harsh but f**k Will and Gareth (winners of last years Pop Idol). Where are the Kate Bush’s and Princes of today? The record companies won’t touch them because they’re too scared.” (thanks to Brian & Svein)…on the 15th December Peter Gabriel was interviewed on BBC Radio 2. Richard Allison played Games Without Frontiers (which features Kate) and asked Peter about Kate. Peter said he was a big fan of her work. Richard commented on the fact that she had not produced any work for a long time. Peter’s reply was “I have heard there is something coming VERY soon.” The DJ was a bit more cynical: “Yes, well she said it would be soon 5 years ago…where’s the new album Kate, c’mon we’re waiting.”…The Times in the UK on the 14th December revealed that “..a Whitehall whistleblower has leaked a secret document showing that Tim Henman is being recommended for a new year’s honour. The insider has disclosed minutes of the main honours committee that vets people for knighthoods and other awards. A five-page Cabinet Office document describes the discussions by Whitehall’s most senior civil servants about the merits and demerits of 38 people being lined up for the new year’s honours list. According to the Whitehall sources, other prominent people being discussed for honours include Eric Sykes, the comedian and Kate Bush, the pop singer.” (thanks Michael)

More on Hayley Westenra‘s upcoming Wuthering Heights single here (she’s already been on the Frank Skinner show on ITV in the UK plugging it) here…Amanda heard Andy Bell on the World Service talking about his love of Kate and playing Wow, Under The Ivy and Moments Of Pleasure on Dec 2nd. He was talking to Kevin Greening on the Top 5 Best show the series which invites musicians to talk about and pick 5 songs from an artist or musical genre that has inspired their own career. Andy talked about her continuing importance in the world of popular music and the influence she has had on him (he even revealed what happened when he dropped round to her house for a cup of tea) Read more here…The Sun newspaper in the UK decided that the recent Q Magazines top 1001 records was a bit out of touch with the real world so they asked their readers to pick their Top 100. Kate made No. 35 with Wuthering Heights. The recent special edition of Q magazine deals with what they call the “1001 Best Songs Ever”. Wuthering Heights made #592 and RUTH #807…The BBC 3 spoof-umentary “Sex, Lies and Michael Aspel” was screened in December and had two brief clips of Kate being interviewed on the Michael Aspel Show. The voice-over said something about Mike meeting “some of the most beautiful women in the world”…On Dec 4th there was a 5-minute interview on BBC1’s breakfast programme with Peter Gabriel. The interview was trailered with a few short clips from a handful of Peter’s videos, and a section of Don’t Give Up was shown, featuring Kate. Peter talked briefly about his new CD greatest hits release, and his involvement with charitable causes including his passion for human rights. (thanks Krys B)…The BBC website mentioned that “New York drag ‘cabaret terrorists’ Kiki and Herb return to London with their latest seasonal show, P***ed at Christmas – a Concert for the Lonely, opening a three performance run at the celebrated south London gay pub, the Vauxhall Tavern. Juxtaposing Christmas classics with songs by Eminem, Nirvana, Kate Bush, Radiohead, Mary J Blige and Debbie Harry…see here…Scarlett has told me that “independent singer/songwriter Danielle French, from Calgary, Alberta, Canada, does a stunning cover of “Running Up That Hill” by Kate Bush on her brand new CD ‘Piece’.” Check out the full clip here (thanks Scarlett)

From Contact Music: “Outkast hip-hop star Big Boi has a surprising musical hero – eccentric British singer Kate Bush. The ‘Miss Jackson’ rapper – real name Antwan Patton – credits his teenage musical development to Bush, and he’s still so infatuated with the reclusive star he wants to track her down and get her to produce songs for his duo’s next album. He says, “My uncle introduced me to Kate Bush’s music when I was about 14 years old, and that shit opened my mind up. The first one I got was The Kick Inside, then I bought Hounds Of Love, then the The Sensual World. “She was so bugged out man! But I felt what she was talking about in the songs. Mother Stands For Comfort, Running Up That Hill. My uncle would explain what the songs stood for. Like The Man With The Child In His Eyes and all that shit. I thought, Wow! she’s so f**king deep! I was infatuated with her, still am. I gotta track her down! I just found out that she was producing all that shit herself! She’s so f***ing dope and so underrated and off the radar. So hopefully on the next record you’re going hear Outkast and Kate Bush do at least two or three songs.” Apparently the band also talk about Kate in the recent Mojo magazine feature. Read more here. (thanks to Christian & Sharon)

The comedy series Little Britain which has recently finished on BBC3 and is now being screened on BBC2 and features a wonderful version of Babooshka in it’s final episode. (thanks Louise)…Lee Kaay re-worked his 2001 version of December Will Be Magic Again for his 2003 “Frost” single EP and DVD. A a video was also shot in Iceland. The EP also featured 3 other seasonal tracks. His DVD “The Russian Tour” will be issued July 2004 and is due to feature his live version of “This Womans Work”. (thanks MB)… the January issue of the UK magazine Gay Times has a brief Q&A with an artist named Jon Cooper (aka Jon Pleased Wimmin); “Are drugs necessary for writing good dance music? Oh God, no. I think they can help sometimes when listening to music, like getting stoned before the cinema. There’s nothing I like more than rolling about the floor cross-eyed, listening to Kate Bush.” (cheers Benjamin)…Channel 5 in the UK trailed the screening of the Batman movie with Kate singing The Man With The Child In His Eyes. It was played over the part of the film during which Batman relives the shooting of his parents when he was a young boy. (thanks David)…The Sunday Herald in Scotland published a list of the 100 greatest albums. Hounds of Love is included, and the author of the list wrote an incredibly positive and well-written blurb for it: “The tidal beauty of Kate Bush’s moon music has long enlivened the mainstream of British pop. Rather than ranking her alongside dull no-marks such as Peter Gabriel and Dave Gilmour, we should look at her work in the tradition of such visionary English artists as William Blake, Derek Jarman and Current 93. 1985’s Hounds Of Love is still her greatest work, mixing esoteric musings with a series of compositions that seem to completely ignore any of the basic tenets of songcraft. They rarely, if ever, venture into predictable verse/chorus/verse territory, yet they are unparalleled in their ability to burrow deep beneath your skin. Although the second half of the record is by far the most ambitious and startling – a conceptual suite defined by dramatic tempo-changes and cut-up voices, it’s the languorous beauty of the singles that remains the most affecting. Running Up That Hill, in particular, still sounds like the most unlikely pop song, its gush of hauntingly surreal imagery as eerily affecting as some half-remembered dream. She may be small but she’s undeniably powerful.” The writer mentions a ton of albums that very much deserve to be on such lists but are usually overlooked for whatever reason. Read morehere

Malcolm Calder has sent this link to an article by David Kennan in the Sunday Herald (Scottish newspaper) from November concerning Wilhelm Reich, Cloudbusters and Kate and Patti Smith’s songs based on his life, read it here…an old article from 1999 featuring Tricky in the German “Visions” music magazine. He mentions Kate and her influence on his own work. Apparently the drum line from Watching You Without Me was sample looped in his song Contradiction from the Juxtapose album. The article can be found (in German) here (thanks Robert)…German TV channel ZDF screened a programme called “Die ZDF Kultnacht – RockPop”. Featuring old clips from the programme “RockPop“, including Kate’s performance of Babooshka. Read more here and there are some screenshots of this Kate performance at Gaffaweb here…The News Of The World printed a cartoon in it’s 28th December edition of Kate with George Bush (with photos of their heads stuck onto their animated bodies), housed within a picture frame, and captioned “Quibbling Siblings…Kate and George Bush”(!)…a trailer for a Channel 5 documentary on Emily Bronte played Kate’s “Wuthering Heights”…and finally the Christmas edition of Ireland’s music paper Hot Press contained this excellent letter which won Letter Of The Fortnight! You’ll see why…(big newsbit thanks to Michael Leitz and Cynthia Conrad)