14th March 2004: Newsbits: Charlotte Martin, who has covered This Woman’s Work live, has recorded Cloudbusting during the sessions for her upcoming album and although it won’t appear on the album it should make it onto an ep or single as an extra track. She has also played it live recently too on Jan 19th at the Hotel Cafe in LA. Read more here. (thanks Doug) Update: Mark Gray has given me this link to download Charlotte’s studio rendition of Cloudbusting which she has made available to her fans, also there is a live version availablehere (thanks also to Mark for the pic of Charlotte with Kate vid, Mark’s Charlotte site is here)…

Galway singer-songwriter Albert Niland has recorded an acoustic version of Wuthering Heights for the popular Tom Dunne radio show on Today FM in Ireland. It’s gotten a great reaction, and I’ve heard it played several times, always unusual to hear a male performer tackle the song. Says Dunne, himself the former lead singer with Something Happens: “His acoustic session and particularly his version of Wuthering Heights was stunning, best reaction we’ve had to a new artist on the show in ages. He is a major new talent”. See the radio show’s chart here, also see Albert’s site.

February’s Observer Music Monthly had an interview with Outkast in which Big Boi repeated his praise of Kate. “I consider me and Dre to be funkateers, man. Growing up we listened to everything and I think that gives us the ability to make a free-flowing type of music. It doesn’t matter whether it’s country, reggae or rock and roll. My favourite artist of all time is Kate Bush.” Interviewer Chris Campion noted that at that point Big Boi’s mobile phone rang and he had Babooshka as his ring tone! (thanks to Rob Jones). Also Big Boi (who clearly has a very romantic perception of Kate’s daily life) is quoted in Sweden’s biggest morning paper Dagens Nyheter: “Her productions are not of this world. I’ve tried to get hold of her to do a collaboration. She’s said to live in a castle somewhere. She has no furniture, just a piano where she plays Mozart all day. She’s said to be crazy or have had her heart broken.” (!) 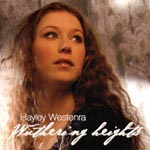 Kate was mentioned on CNN Headline News on March 9th on “The Music Room” during a piece on 16-year-old NZ singer Hayley Westenra and the release of her version of Wuthering Heights. Hayley has the best-selling debut album in the history of UK’s classical charts (thanks to Tim Bertram)…Swedish singer-songwriter Nicolai Dunger performed a cover of The Man With The Child In His Eyes on Swedish TV. Go to this site then choose the link for “TV-husets webb-tv” at the bottom of the page to see the video clip. (thanks Helena)…Sky News “gossip guru” Neil Sean reported on Feb 13th: ” I hear that 70s and 80s warbler Kate Bush, famous for hits like Wuthering Heights, is to get the West End musicaltreatment. A source told me: “We are working on a storyline idea. She had such a wonderful collection of songs.” Read it here (thanks to Michael Leitz)…BBC Radio 6 have compiled a poll of the 20 songs that saved lives, Kate and Peter Gabriel were number 8 with Don’t Give Up, read more here (thanks to Rachel). Also on BBC Radio 2 recently Jonathan Ross played Hounds Of Love on his Saturday morning show, Stuart Maconie played Don’t Push Your Foot On The Heartbrake on The Critical List and This Woman’s Work was played on Sarah Kennedy’s show…US band Eisley have been compared to Kate in this review: “Imagine if Kate Bush had been a young American eccentric instead of a British one, and you get a good idea of the foundation Eisley are quietly laying for themselves. Fantastical lyrics, wispy melodies, and good guitar parts – what’s not to like?” (thanks to Linda Parham)

According to Billboard Greg Dulli’s Twilight Singers are planning to record an EP of covers, to be titled “She Loves You” and due for release this summer by One Little Indian. Tracks include the Billie Holiday-popularized “Strange Fruit,” John Coltrane’s “A Love Supreme,” Kate Bush’s “Cloudbusting,” Mary J. Blige’s “Real Love” and the Rufus and Chaka Khan chestnut “Ain’t Nobody.” (See also Aug 24th 2003 newsbit – thanks to Michael Leitz)…Finally, last September Kate had her name registered as a European trademark till the year 2012 to cover all manner of products, still under the Novercia company name. Find it by doing a search for “Kate Bush” at the Office for Harmonization in the Internal Market site here (thanks to Doron)