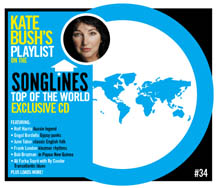 Paddy Bush, Kate’s brother, has let me know that the World Music magazine Songlines are including Kate next month as part of a series of regular features called “My World” (rather like a world music desert island discs). Paddy, who writes for the magazine and is featured in the current issue, persuaded Kate into selecting her top ten world music favourites, which will be featured on the cover mounted CD. We know that Kate’s choices include Justin Vali from Madagascar (who played on The Red Shoes album and has worked and toured with Paddy). Also chosen is music from Germany, Brittany and Ireland. Kate will have a comment on each of the tracks to go with the CD. The magazine is out on the 9th of December. Spread the word! Read more about ordering the Songlines magazine here. 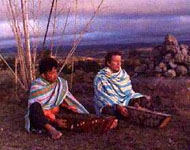 Also, the excellent Madagascar film that Paddy did for for Channel 4 in 1998, Like A God When He Plays, has been shown on a US satellite TV station called Link TV and will be repeated throughout this coming week, see the channel’s website here for broadcast times. This is a beautiful film and I know from my emails that there are a lot of Paddy Bush fans who missed it first time out. Thanks Pad, congrats again on Kate’s top 4 hit single (Paddy, reluctant popstar, did the spooky backing vocals!). Paddy has also sent in a feature for issue 77 of HomeGround, which will be out in April. Read more about Paddy and the documentary at my original feature here. UPDATE: From the editor of Songlines: “not all the tracks on the CD are Kate’s playlist, the CD also includes our own editor’s choice selection, Kate’s selection includes Rolf Harris, Ali Farka Touré with Ry Cooder and Justin Vali“