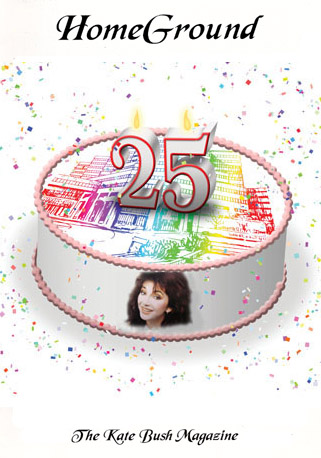 “Hello there…this is ‘Homeground’, the first serious attempt at a Kate Bush fanzine…” With these words 25 years ago today, the longest running Kate Bush publication ever started its incredible journey into the hearts and minds of fans spanning the entire globe. Conceived in Dave Cross’s flat in May 1982 the first issue consisted of 25 copies run off an office photocopier! Today, almost 80 issues later, it’s impossible to imagine how things would have been without Homeground being there with us. To say the magazine has been a labour of love doesn’t even come close to the blood, sweat and tears (and laughs!) that Krys, Peter, Dave, Debi, Sharon, Mandy and more have poured into the definitive coverage of Kate’s career for her loyal army of fans.

I first subscribed as a teenager and actually thought that “Homeground Towers” was, well, a tower! And I knew I wanted to go there someday. Homeground exhaustively covered every aspect of Kate’s music and activities. The depth and authority of the analysis within its pages has informed every subsequent mainstream biography published on the subject. What really puts Homeground in the esteemed position it has in people’s hearts however is the warmth, love, care and understanding that is to be found within its pages. Homeground is a place, and we all feel better spending time there. Fans could express their feelings of joy, pain, loss or grief that Kate’s music helped them to work through. The letters pages and articles in Homeground are a powerful archive of just what magnificent things can happen when people are invited to share their feelings together in a safe place. The beautiful artwork, in particular by the wonderful Debi Bowes, makes the magazine a feast for the eyes too. Kate herself has always lent words of support to Krys and Peter in particular over the years, and they’ve been happy to star in a couple of her videos in return! Thankfully the Internet explosion that has happened during Homeground’s lifetime hasn’t dented their faith in the printed format (it’s in the British library you know!). Nevertheless the forum which we launched together has become the largest online community of Kate fans out there, hardly surprising with the Homeground name attached.

Whatever their adventures over the course of the next 25 years, I’d like to send a huge hug, and an enormous THANK YOU to Homeground, for simply brilliant work and dedication for quarter of a century! We’re all getting ancient!! Sean xxxx