Update: Kate has now sent a message of good luck to Bo on her official site:

Dear Bo, Many congratulations on your fantastic performance last night on The Voice. I thought it was really beautiful and very moving. I feel so proud of you. Good luck for tonight and very best wishes to you and your mum. With love, Kate Bush  xx 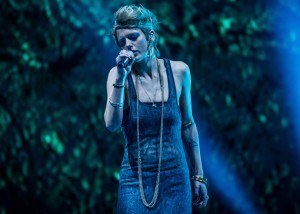 From Michael Hogan’s Daily Telegraph live blog: “20.26 The final act tonight is Bo Bruce for Team Danny. The aristocratic girl with the quirky indie voice. Her mother is seriously ill at the moment, which was reported in the papers this morning and she admirably doesn’t mention but Danny does. Another great song choice – they’re ending strongly in that sense – with Running Up That Hill by Kate Bush. 20.28 Slightly static staging and hard to compete with La Bush, but she’s got a lovely tone to her voice. 20.29 Nice acapella coda there and an emotional climax. “Art is the only justification for pain,” says Danny. Well-meaning but rather melodramatic. Will calls her an artist. Compliments come no higher on this show, it seems. Jessie’s proud and loves being part of the show. Tom comes over all avuncular, tells her to channel her current experience into her voice and let it all flow. Bless him.”

The Judges comments in full:

JESSIE J: I was ready to stand up before you finished your song. This is a great show to be a part of, what a wonderful ending! WILL.I.AM: This is a great show and you are all singing to represent your country. You Bo are an incredible artist and I know there is a Voice US and a Voice Australia, but singing like you did, the UK has something really special out of all The Voice’s TOM JONES: If there are things that are bothering you or on your mind you should try to use it as a strength and tonight you let it all flow and it was fantastic! DANNY O’DONOGHUE: It’s been very tough, the reason why I came on the show is to find someone like you. Someone who is willing to bare their soul to the whole world. I am proud, your mum is really proud and the whole of the UK is really proud too.

Useless fact: Bo Bruce is daughter of the Earl of Cardigan and a descendant of the Lord Cardigan who led the charge of British cavalry known as “the charge of the Light Brigade” against Russian forces during the Battle of Balaclava on 25 October 1854 in the Crimean War.

John Carder Bush writes about photographing his sister in The Independent