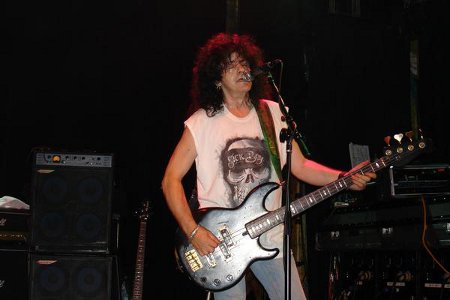 We were saddened to hear this week of the passing of 68-year old Scottish bassist Jimmy Bain, who plays bass guitar on the songs Sat In Your Lap, Leave It Open, and Get Out Of My House from Kate’s 1982 album “The Dreaming”. Sending our condolences to his loved ones. TeamRock has paid tribute by listing his moments of genius here.

“Because the funny thing is you’ve got Jimmy Bain, who was in Rainbow, and is in Wild Horses. He seems to play on all the crazier tracks. I think, what I enjoyed again about this album was each track has got a very different mood to it, really, or groups of tracks have got different moods, and it was nice to use people, almost specifically, for what they were very good at, and I always think of Jimmy as being a really super rock’n’roll bass player, which isn’t meant to be detrimental, because I think it’s great, actually. Because what those songs needed that he was on was a very simple, very driving bass that was going to keep the whole thing going, without being distracting, or too full. And Jimmy was just right for that, really. So he worked on the three tracks that I would definitely say are the rockiest, the most up-tempo, perhaps the most aggressive.”

And did that have something to do with the fact he, with Wild Horses, had had a contract with EMI?

“Ah, you see I didn’t even know he was with EMI. I knew he was with Wild Horses, and I met him when I just bumped into Phil Lynott in a recording studio.”

Really, when was that?

“This was at The Townhouse, and I was there to just look over the studio, because that’s where I wanted to work, and Phil was actually going to give me a weekend of his time that he wouldn’t be using, so I just went in to check out that it would be OK. And he was doing a really far-out vocal at the time…”