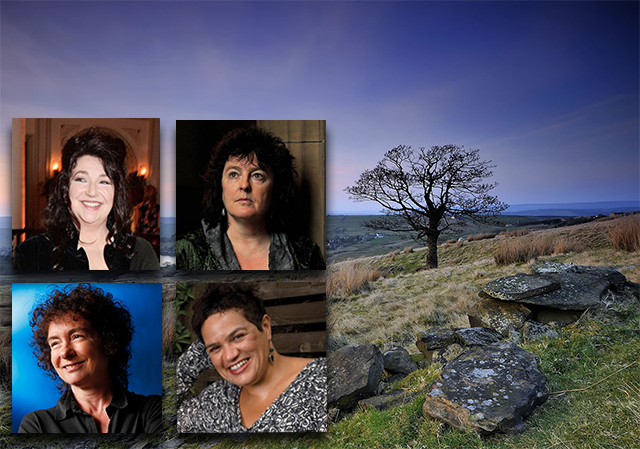 Kate has agreed to contribute a piece of poetry, along with poet laureate Carol Ann Duffy, the Scottish makar, or national poet, Jackie Kay and the novelist Jeanette Winterson in a summer project celebrating the Brontë sisters. All four have been commissioned to write a piece of poetry or prose which will then be engraved on stones positioned over the eight-mile route between the sisters’ birthplace and the family parsonage between Thornton and Haworth. Winterson will celebrate the Brontë legacy as a whole, Duffy will celebrate Charlotte, Kay has Anne and Kate has Emily. The writers have been commissioned by Bradford literature festival, which will unveil the stones in July.

2018 marks 200 years since the birth of Emily Brontë and 40 years since the release of Kate’s single Wuthering Heights. The stones project may possibly be the only way Kate will be marking the 40th anniversary of her song. The other three writers are confirmed to inaugurate the stones on July 7th in Bradford by reciting their words. Read more at The Guardian here.

From the event Press Release:

BRADFORD, 26th April 2018 – Writer and musician Kate Bush, poet Carol Ann Duffy, poet and novelist Jackie Kay and novelistJeanette Winterson come together to celebrate the literary legacy of the Brontë sisters, with a new permanent multi-site public art installation set in the rugged landscape of Yorkshire, that the Brontës themselves immortalised with novels such as Jane Eyre andWuthering Heights.

Curated and delivered by Bradford Literature Festival (29 June – 8 July 2018) and originated by writer Michael Stewart, the Brontë Stones project features four new, original works of writing, engraved onto stones in different locations connecting the Brontë sisters’ birthplace in Thornton and the Brontë family parsonage, now the Brontë Parsonage Museum, at Haworth. The captivating journey along the four points, of approximately 8 miles, form what is believed to have been the route the sisters themselves often took between the two locations.

Of the four commissioned pieces, three of the works (by Kate Bush, Carol Ann Duffy and Jackie Kay) respond to one of the Brontë Sisters (Emily, Charlotte and Anne, respectively), while the fourth (by Jeanette Winterson) responds to the Brontë legacy as a whole.

Accompanied by beautiful, hand drawn maps, created by Yorkshire cartographer Christopher Goddard, the stones take visitors on a journey in the footsteps of these extraordinary Yorkshire sisters, whose novels are recognised worldwide as some of the greatest works of literature to emerge from the 19th century. The project will leave a permanent memorial in the landscape that homed and fueled the imagination of these ground-breaking writers.

The Brontë Stones will be inaugurated this year, the bicentenary of Emily Brontë, at Bradford Literature Festival in a special launch event titled The Brontë Stones: Meet the Writers. Taking place on Saturday 7 July at Bradford’s historic Midland Hotel, writer’s Carol Ann Duffy, Jackie Kay and Jeanette Winterson will be in attendance, presenting the first official readings of their new work. On Sunday 8 JulyMichael Stewart will lead visitors on a guided walking tour In the Footsteps of the Brontës taking in each of the four stones for the first time. Tickets for both the launch and walk are now on public sale at www.bradfordlitfest.co.uk.

Following its inauguration at this year’s festival, the walk remains for members of the public to undertake for generations to come. As a legacy project, future plans include the development of a mobile app providing a personal, guided experience of the Brontë Stones walk.

This project has been made possible by funding from Arts Council England and sponsorship from Provident Financial Group PLC.

“It’s been a real pleasure working on the Brontë Stones project. The Brontës are part of the literary landscape of this country. The stones are exciting in that they will make the past new again, opening up along the way new paths for different readers to follow.  I particularly loved writing about Anne – she’s the most underrated writer in the family, the pioneer about whom people know the least. I liked the challenge of writing a hidden poem within the poem on the stone and working with the artist to try and achieve that effect.”

Jeanette Winterson said, about the Brontës:

“When I was growing up in Lancashire and roaming the hills in the rain, and feeling both passionate and misunderstood (like all teenagers, well, maybe some have better weather), I read the Brontës and felt their spirit stand by me. For me, reading is about connection – and connection that works across time too. Good books live in the present, regardless of when they were written. The Brontës showed me that hearts beat like mine, that the struggle to know who you are happens across time and generations, and gender. They showed me that writing needs the power of the personal behind it – but that somehow the story one person tells has to become a story many people can claim as their own. And the Brontës are women. As a woman I needed those ancestors, those guides. I still do.”

“It has been a huge privilege to curate and deliver the Brontës Stones project as part of the Festival this year. The Brontës are an integral part of the literary landscape of Bradford, and the inspiration for our annual Bronte Heritage strand of events. It is therefore an honour for Bradford Literature Festival to bring the legacy of the extraordinary Bronte sisters to life in this exciting new way. It’s a matter of great pride for us that the Stones will stand in some of the most beautiful places in the county, bearing these moving, mysterious and playful literary works, that the public can enjoy for years to come.”

Other events related to the Brontës taking place at Bradford Literature Festival 2018 include:

“I first conceived of the Brontë Stones project in October 2013. I live in Thornton and have long wanted my village to receive recognition for its place in the Brontë story. All three literary sisters and their wayward brother were born here. They were a happy family, but very shortly, after their move to Haworth in 1820, tragedy struck. First the death of their mother, then the two oldest siblings. I was also aware that Anne Brontë was buried in Scarborough many miles from the rest of her family and I wanted a stone to mark her return. It’s fantastic to see the project come to fruition.”

“We are thrilled to be playing a part in this exciting project and are delighted that the Anne Stone will be situated in the grounds of the Parsonage, where Anne spent almost all of her life.  Haworth and the Yorkshire landscape are of immense significance to the Brontë story and we are sure local residents and visitors will enjoy making their way along the Brontë Stone trail for years to come. We look forward to building on our partnership with Bradford Literature Festival as together we continue to celebrate the legacy of Anne and her sisters.”