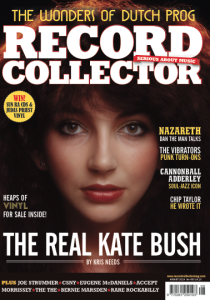 Record Collector magazine features Kate on the cover of their latest issue. It features an article by Kris Needs, who has interviewed ate three times over the years. Here’s a brief extract from the article – the magazine is available to order at the Record Collector site here.

“The return of Kate Bush to the concert stage after 35 years has been greeted with the kind of hysteria which has already made the 22 shows she’s performing at the Eventim Apollo in London this year’s most scorching ticket.

Recalling and possibly trumping Bowie effortlessly claiming 2013 by slipping out a new album, the announcement of Kate’s Before The Dawn residency has quite rightly been greeted as a major shock; certainly the last thing anyone expected.

Those decades since 1979’s ahead-of-its-time Tour Of Life have seen Kate become one of the world’s most elusive, mysterious but ever-fascinating artists, her enigma boosted by her self-imposed retreat from the spotlight. But away from occasionally sleazy speculation such a below-the-radar public profile always stokes (the tabloids laughably claimed La Bush was 25 stones when she took three years to make 1985’s Hounds Of Love), her return to the stage at the age of 56 shouldn’t be that unexpected…”