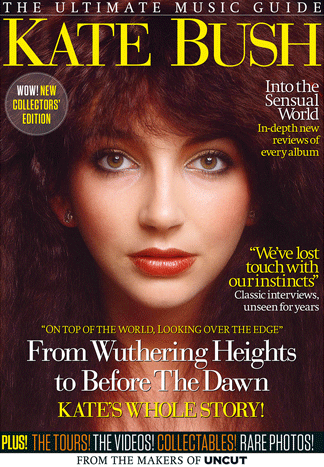 Uncut Magazine in the UK have released one of their “Ultimate Music Guides” dedicated to all things Kate. Available in newsagents on the 12th and online here. More also in their editorial here.

From the blurb: “There are few British musicians who are as revered and elusive as Kate Bush – a fact brought home by the rapturous acclaim that greeted her return to live shows, after 35 years, in 2014. Now, Uncut’s latest Ultimate Music Guide reveals the truth about Kate Bush, and examines every part of her momentous and often strange career.

As usual, we’ve dug deep into the archives of NME and Melody Maker to find revelatory interviews with Bush. “There are always so many voices telling me what to do that you can’t listen to them,” she told one Melody Maker journalist in 1985. “All I ever do is listen to the little voices inside me. I don’t want to disappoint the little voices that have been so good to me.”

From the striking arrival of “Wuthering Heights”, through to the magical comeback of Before The Dawn, the Ultimate Music Guide: Kate Bush tells her whole story. Uncut’s writers have revisited every one of her albums and provided detailed new reviews: every song reassessed and rated. And along with the interviews, they show a genius on her own trajectory, whose idiosyncratic vision, and whose determination to bring that vision to fruition, has been there right from the start.

That’s the Ultimate Music Guide: Kate Bush. We just know that something good is gonna happen…”