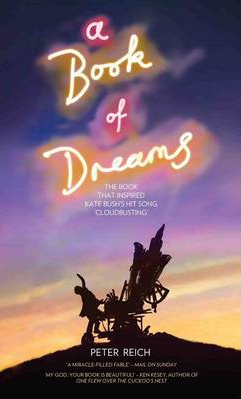 ‘Cloudbusting’ was inspired by a book that I found in a shop …Written by a guy called Peter Reich, and it’s called A Book of Dreams. And it’s a very unusual, beautiful book, written by this man through the eyes of himself when he was a child, looking at his father, and the very special relationship between them. His father meant so much to him. – Kate Bush

Anyone who attended Kate’s Before the Dawn concerts in London last year will have witnessed the jubilant live performance of Cloudbusting that closed each evening’s show. As most of you will know, this powerful and enduring classic song is inspired by “A Book of Dreams“, written by Peter Reich, about his father, the brilliant but persecuted Austrian psychoanalyst Wilhelm Reich.

The book has just been republished with a new introduction by Peter Reich, and a still of Kate on the cloudbuster adorning the cover. It has been out of print and very difficult to obtain for over twenty years.

Thanks to the nice people at John Blake Publishing we have 5 copies to giveaway! To be in with a chance of winning a copy all you have to do is answer the following question:

Who played Wilhelm Reich in the video for Cloudbusting?

Please send your answer to bookofdreams@katebushnews.com – if you are successful I will then be in touch by email to get your details for getting the book to you. The competition runs till the end of Wednesday March 11th at which point the random draw will be made. Good luck! p.s. if you can’t wait, the book is available from Amazon here.

Competition Rules: Competition starts March 5th 2015 and ends March 11th, 2015 at 23:59 (GMT). One entry per person. Multiple entries, the registration of multiple email addresses for one person and incomplete entries will result in disqualification. katebushnews.com is not responsible for the timeliness of delivery or electronic or computer malfunctions that may affect the delivery or content of entry. Winners will be selected in a random draw from all eligible entries on or about March 12th, 2015. Winners will be notified by email. If winners cannot be reached within 3 days of notification, alternate winners will be selected. Odds of winning depend on number of eligible entries received. Prize is non-transferable and non-exchangeable. No substitution or cash equivalent will be made. All decisions of katebushnews.com is final. Winners should allow 6 weeks for delivery of prize.

4 Responses to WIN! A copy of the new edition of “A Book of Dreams” by Peter Reich