In the April issue of the German music magazine Musikexpress, Tori Amos talks about her CD collection. Included in her 10 choices are; David Bowie, Marvin Gaye, The Cure and Kate’s Hounds Of Love. Tori has this to say about the album: (thanks to Rolf Peukert for the translation) 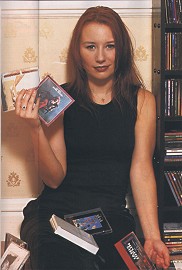 “I love the second side of this album. I was in Los Angeles when I heard this record for the first time. I was hanging out in the rock chick scene. Thigh-high boots, gigantic amounts of hairspray, and everything. I had encountered nothing but rejection for months, nobody liked my piano stuff. And I was in a band that did something completely different. Then I found this record, and put it on, listened to side one, liked it OK, listened to side two, listened to side two again, and again, and again and again (sings): “You can’t hear me, you can’t hear what I’m saying, you didn’t hear me come in, you won’t hear me leaving.” This turned me inside out. It changed my life. I decided to leave the man with whom I shared an appartment; I left the man I was living with because of this record.”

Further to the above article, Tori is also interviewed by Tom Doyle in the May edition of Q Magazine (no.140):

If the songs on Little Earthquakes served to heal the emotional scars of their creator, then the reviews for the album threw up one recurrent comparison: Kate Bush. The debt’s there in the song’s skewed perspectives on the world outside, and the singer’s contortion of certain vowels.

“I’ll never forget the first time I heard about Kate,” Amos recalls. “I was playing in a club, I was 18 or 19 and somebody came up to me, pointed their finger and said, Kate Bush. I went, Who’s that? I wasn’t really familiar because Kate didn’t really happen in the States until Hounds Of Love. I was shocked because the last thing you want to hear is that you sound like someone else. Then people kept mentioning her name when they heard me sing, to the point where I finally went and got her records. When I first heard her, I went, Wow, she does things that I’ve never heard anybody do, much less me. But I could hear a resonance in the voice where you’d think we were distantly related or something.”

So you were never influenced directly by her?

Did you sing along with the records?

“Absolutely. But I knew that I had to be careful, so I didn’t voraciously learn her catalogue. I left the records with my boyfriend at the time, because I didn’t want to copy her.”

The US tribute album…more details