HomeGround 65 reports on new album, the CD remasters and that Dinosaur track….. 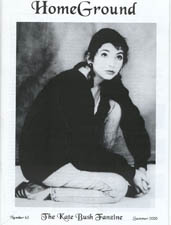 As expected, HomeGround magazine’s latest issue has provided important updates on several interesting Kate news stories. The Summer 2000 edition reveals that “Kate is continuing to work steadily on a new album”. However they say that “the most realistic forecasts for a release date at this point is the latter part of next year”. The fact that Kate’s taking her own good time with the album will come as no surprise to seasoned fans, but as mentioned on this news page earlier there is something very special to look forward to in the meantime…

In April Kate gave the go-ahead to have the remaining six albums in her catalogue remastered and re-packaged as with the 1997 re-release of Hounds Of Love. Dave Cross of HomeGround and Steve Davis at EMI are working on the new digitally remastered and extended editions. HomeGround report that “each album is to be re-mastered at Abbey Road by Chris Blair, who cut the original Wuthering Heights single, and who re-mastered Hounds Of Love….the booklet of each CD is to retain the original artwork but will have additional photographs and new sleeve notes which will be written by the HomeGround editors.” Dave Cross says that “EMI are putting a lot of time and money into making sure that these re-issues look and sound great….Kate’s first four albums will especially benefit from the re-mastering.”

So, when are they coming out? The plan at the moment is to firstly release The Sensual World in September and then The Red Shoes in the early new year (Note: The Red Shoes will not be released in September also, as first reported), sleevenotes by HomeGround’s Peter and Dave respectively. The additional tracks for these first two releases will be contained on the second CD of a two-CD package.

HomeGround also mention that the Dinosaur track that Kate originally recorded for the Disney animated film was not used because the “suits in charge of the film” didn’t like Kate’s words and asked her to first change them and failing that they then instead wanted a “song without words…emotional background”. The magazine states that “at that point Kate threw in the towel”.

As if all this news wasn’t enough the magazine also prints Paddy Bush’s excellent article on the making of Justin Vali’s The Sunshine Within (order your copy today!), an article by veteran US Kate fan Andrew Marvick on how he feels about Kate in 2000, an edited version of my interview with Brian Kennedy (which I have always promised Brian would be printed in HG, so there you go Brian!), and all the usual features such as Five Years Ago, reader’s letters, and more news gathering than this website could ever hope to do. You can order your copy from the HomeGround Pages.

A Message from Kate….