The 100 Best Record Covers of All Time

David Sheasby sends in his report on Kate’s inclusion in the new book from Q magazine: “I’ve just been to my local newsagent and found a special limited-edition ‘Collectors Special’ glossy paperback by ‘Q‘ magazine called 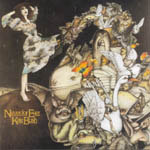 “The 100 Best Record Covers of All Time”, which features Never for Ever on pages 110-111. The article includes a photograph of the Never For Ever front cover, some extracted artwork (black bat, butterfly on bleeding rose…) and a summary of the various scary creatures issuing from Kate as she stands on the hill.

Nick Price, the artist, is quoted as saying, “She gave me a specific brief. Light and dark creatures coming out from under her skirt. I think the meaning is unequivocal, but I did ask her at the time. She just gave a big grin.” Elsewhere Kate has commented on the mixture of optimism (as personified by her white swan appearance on the record label) and despair (represented by the Kate as black bat) which is part of music and the creative process. On a different level entirely, it was therefore amusing to read of her dilemma when choosing a name for the album, after the artwork had been completed: “We had to be careful,” she says. “My skirt was blowing about but there couldn’t be anything about wind in the title or that would make the album one big fart.” (big thanks to David, also thanks to Orla Murphy)