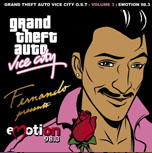 November 11th 2002: Rockstar Games has released the latest version of Grand Theft Auto computer game for the Sony Playstation 2, “Vice City“. It’s set in a fictional Miami-esque city in the 80’s. The game’s storyline involves stealing cars and other crimes. Whenever you steal a car, you can change the radio stations, and if you tune into Emotion 98.3 you’ll find Kate’s “Wow” in regular rotation! Pre-orders for this very popular new game are said to run into millions of copies. It even seems that Kate’s track will be released on the accompanying soundtrack music CD on Epic Records. (thanks to Tracy Story, Alex Hornby, Cynthia Conrad, Jonas Messias Junior and Michael Leitz – lots of surpised Kate gaming fans out there have been emailing me!)

Kate at #11 in BBC All Time Number Ones Poll

katebushnews.com ·
@katebushnews
Full details below on tomorrow's BBC Radio 6 Music Deep Dive into The Kick Inside PLUS Listen Again links to those wonderful 5 hours of excellent programmes the BBC has already broadcast this week. Quite the treat! https://t.co/HANrl4t3gE
View on Twitter
1
3