In King of The Mountain 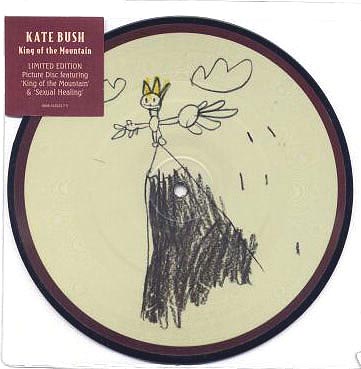 King Of The Mountain is today in at number 4 on the CD:UK chart on ITV…meanwhile the video has been discussed at Contact Music here…the single has entered theIrish charts at number 13…Kate’s new single has been a smash hit on alternative and college radio stations in the USA – The Filter Weekly Radio Chart is Filter Magazine’s compilation of their favorite college, indie and modern rock and Adult Album Alternative stations around the country. Kate is at number 1 in their Top Fifty Singles chart, which also includes the excellent Sigur Ros, Death Cab For Cutie, Iron & Wine and My Morning Jacket – great taste! See the chart here…

The Sun have made the single their Single Of The Week on 21st October, rating it 5 out of 5 and devoting a whole page to Kate, reviewing every single album also: “a magnum opus of almost five minutes filled with sophisticated beats, swirling synths and typically oblique lyrics. Happily Kate’s voice doesn’t sound the least bit rusty. It’s a ravishing comeback.” Top Of The Pops give the single a 4-star review here and a great review written to appeal to the show’s younger fanbase. “Right pop kids, get yer thinking caps on for a quick lesson in pop amazingness. Although Her Royal Bushness isn’t your usual quirky pop sproglett (in fact, in pop terms she’s positively ancient at 47!), she paved the way for pretty much every kooky and thoroughly unique female singer since. Without her, avante-garde pop a la Blur, Prince and The Killers would not have existed and Tori Amos, Christina Aguilera and Alison Goldfrapp would probably have been serving you chips over the nearest Spam-U-Like counter. And did we mention that she wrote the best elasticy-throated pop song ever, ‘Wuthering Heights’, when she was only 19? Anyhow, ‘King of The Mountain’ – her first single release in 12 years – has the usual Bush trademarks stomped all over it. Soaring fruity vocals, thought-provoking lyrics, a driving rhythm and gorgeous electronic twiddlings make this a gem of a song. But if jiggling your booty and punching the air is your thing, you’ll probably hate it!”

Heat magazine gives the single a 4 star review: “Great excitement awaits the first single in 12 years from eccentric icon Kate Bush. Fans won’t be disappointed with a song that flies from whispering electronic pulses to a finale of billowing melodies, edgy guitars and windswept choruses.” Gigwise also like the track here: “Now children you may think it’s a bit sad to like a track by an artist that your Dad fancied over twenty years ago, but Kate Bush deserves your attention. In a era of identikit pop stars we should thank our lucky stars that Bush has come back from the abyss to grace us with her presence and with ‘King of the Mountain’ she doesn’t disappoint. Five minutes of Bush’s eerily beautiful voice and a windswept ethereal melody proves truly mesmerising. Simplistic in the extreme it may be, but a great comeback it is also.”

Simon Donohue of The Manchester Evening News rates the single 4 out of 5 and says: “It sees her embarking on a slow ascent towards a suitable ethereal peak, synthesized wind, drums and gentle music providing a worthy companion for those familiar hanunted vocals. As the title also suggests, this is something more epic than the chart-friendly numbers which she was once known for. One way of summing it up is to say that it is one of those songs which had you turn out the lights, close the curtains and sit in the dark when testing out your early CD player, and it sets the scene for a towering comeback by one of the country’s finest talents” The UK’s Metro paper says: “With its references to Citizen Kane and Elvis, the first outing in 12 years by the mighty Bush is as strange, haunting and surreal as you’d expect. Hardly a karaoke fave but her three-octave warble is treat enough. 4 out of 5.” Rolling Stone gives King Of The Mountain their 4-star rating: “After twelve years of silence from influential U.K. eccentric Bush, her fans are setting the Internet aflame with their joy at hearing her airy proto-Tori Amos vocals again. But even newcomers can appreciate this grandiose comeback, which veers pleasurably from spooky electronic pop to majestic, reggae-inflected rock.”

Dotmusic rates the single 8 out of 10 here: “Built around a revolving, processed xylophone mantra and some spaced-out guitar FX, Bush’s enigmatic entrance from the fog is initially so vague and indecipherable as to conclude that she surely hasn’t been frantically scribbling lyrics for the past decade. However, the track soon shifts powerfully into billowing clarity in a thunder crack of atmospheric, elemental power, whispers of “the snow in Rosebud” and claims that we may in fact be talking about Elvis Presley here.  While not exactly “Wuthering Heights” – but then, nothing is – “King Of The Mountain” marks the absurdly long-awaited return of a singular force.” Tired of all those amazing reviews yet? Here’s how The Guardian reviewed the single on 22nd Oct: “Looks a bit like Delia Smith these days, does Kate – you’re half expecting this single to start with a drunken cry of “Where are you?” In fact, this sets out promisingly, hoving in like a sea fret, as a Citizen Kane-inspired lyrical theme takes shape. But then, in comes the chorus, “The wind is whistling”, and it’s like the giant, corporate epic rock propeller has been trundled onstage and activated as in pile the session drums, like a drunken Phil Collins gatecrashing a pleasant soiree.” Well, we can’t have everything 😉

[For all the very latest news mentions check our forum’s Medialog section. The huge online Kate Bush resource Gaffaweb is now being continually updated with all Aerial-related articles etc, be sure to check it out. Note: Full International Aerial news round-up coming soon.]

King Of The Mountain enters the UK chart at Number 4!