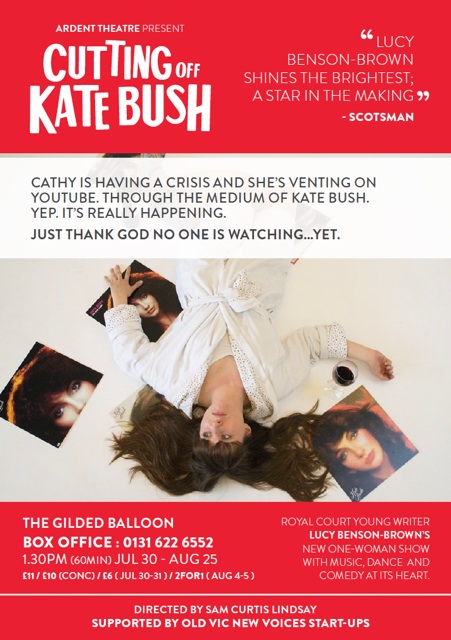 “With Kate Bush touring for the first time in 35 years, Cutting off Kate Bush arrives at the right time. Lucy Benson-Brown channels the Gothic undertones of Bush’s music to create a new take on family politics. Young Kathy has had to return home and is attempting to come to terms with her father’s new relationship.

Certainly no tribute act, the play explores the tragedy and comedy of moving back home through the singer-songwriter. It is the honesty of Bush’s music that makes for ideal theatre according to Benson-Brown, as well as her own memories. ‘I remember being aware of Kate Bush as a teenager, I vividly remember “Wuthering Heights” being played on Top of the Pops 2 and my mum singing along,’ says Benson Brown. ‘Bowie, Pink Floyd, Bananarama, Genesis, Spandau Ballet, perhaps even Madonna, would have shaped a similar story because it’s inspired by the music that my parents listened to, it’s just that they wouldn’t offer the same magic as Kate Bush. Her music lends itself so well to dramatisation.’

Featuring hits from the eccentric songstress as well as showcasing Benson-Brown’s ballet training through Bush-influenced dance routines, it promises to capture the revived passion for the ethereal Kate Bush while telling a very human tale.”