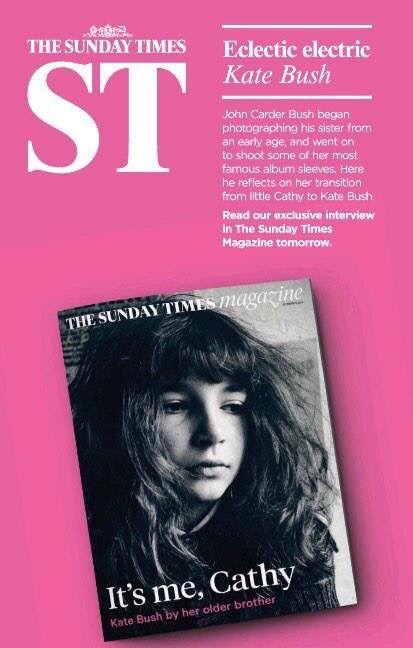 Tomorrow’s edition of the Sunday Times Magazine in the UK and Ireland will feature an interview with Kate’s brother, John. This is to coincide with the publication on November 20th of a new edition of his iconic book of photographs of Kate as a child, ‘Cathy’. The book can be pre-ordered as a limited signature edition here, or on Amazon here (it is also available from all major booksellers).

First published as a run of just 500 copies in 1986, Cathy is a collection of photographs by John of Kate as a young girl, with accompanying text. This new edition – the first printing since the original edition – includes a new introduction by John Carder Bush, illustrated with eight previously unpublished photographs.

A beautifully bound hardback with a linen cover, head and tail bands and a matching linen slipcase, Cathy is comprised of twenty-eight cut out pages featuring the text, with full-page photographs revealed on a separate page beneath. The design matches the original limited run in layout, including the original introduction as well. (With thanks to Isabelle for posting the magazine ad)

Kate reflects on “one of the most extraordinary experiences” of her life!